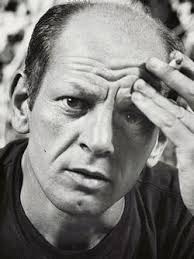 Paul Jackson Pollock (January 28, 1912 – August 11, 1956) was an American painter and a major figure in the abstract expressionist movement. He was well known for his unique style of drip painting.

Pollock was introduced to the use of liquid paint in 1936 at an experimental workshop in New York City by the Mexican muralist David Alfaro Siqueiros. He later used paint pouring as one of several techniques on canvases of the early 1940s, such as Male and Female and Composition with Pouring I. After his move to Springs, he began painting with his canvases laid out on the studio floor and he developed what was later called his "drip" technique.