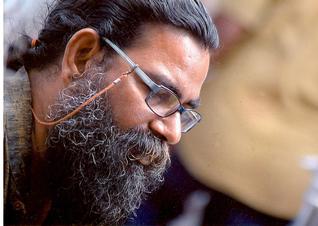 Born in a small village in Kanyakumari, Rajasekharan is a self-taught artist with many accolades for his work. He holds The guinness World Record and Limca Book of Records for Largest hand painted Easel. Inspired by the works of Peter Paul Rubens and Rambrant, he started recreating his own world of realist portraits. His portraits of the celebrities are highly praised and features in many celebrated private collections now.
Rajasekharan experimented with the mass culture of commercial art space of huge commercial hoardings all over Kerala and Tamilnadu with the same ardent passion.
Saddened by the fast disappearing culture of hand painted, eco-friendly hoardings and its replacement by the massive manufacturing of flex boards, he ventured into the unique project of painting the worlds largest easel. The easel is 56.5 ft. tall and 31 ft. wide and holds the painting of EMS of size, 25 ft. height and 50 ft. width. The Guinness World Record and Limca Book of Record acknowledged his success. He is an active part of the Guinness community now.
He was invited to participate in workshops, competitions and artfares in many countries including Vietnam and Korea.
His portrait of Fidel Castro was selected for the ArtsLand showcase competition.
Rajasekharan came first in the opinion poll conducted by Ananda Vikadan, famous Tamil publication, on the paintings made by seventy-five selected artistes.
His other passion, auteur cinema made him one of the most renowned art directors in the country. He has worked with the renowned Indian filmmaker, AdoorGopalakrishnan for many films and won many awards for his work as an art director.